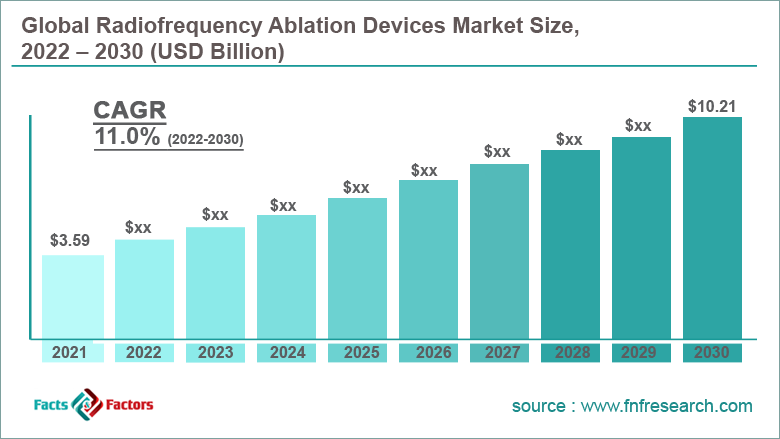 Radiofrequency ablation (RFA) is a medical procedure that is used to destroy tissue using heat energy. The method is used widely in the healthcare sector for pain management. During the procedure, radio waves are used to produce a current that leads to the heating of a certain area of the nerve tissue. The section where the heat is directed gets destroyed which means that the affected area is unable to send pain signals to the brain. RFA processes have known positive responses as they can help patients get rid of lasting chronic pain due to various medical conditions.

RFA devices have to be manufactured with complete accuracy as any defect can lead to serious harm to the patient. Radiofrequency ablation is a minimally invasive method that can help in shrinking the size of nodules, tumors, and other growth in the body. With the help of curated devices especially for conducting RFA procedures, the medical community has been able to expand its services in treating medical conditions that were earlier limited due to a lack of accurate treatment methods.

The global radiofrequency ablation devices market is projected to grow owing to the increasing demand for pain management treatments due to the increasing number of medical patients affected by different conditions. RPA is one of the most preferred ways of managing pain concerns in patients who have long suffered from it. The process is used in the treatment of lower back or neck pain as well as pain induced by the worsening conditions of arthritis joints that could not be treated with any other method. RFA is carried out for various purposes including pain reduction or completely stopping it in certain cases. It can also be carried out to improve bodily functions or reduce the number of pain medications administered to the patient. In situations where surgeries cannot be conducted for any reason, the RFA technique can be used to delay the operation.

Since the procedure does not take a long time, the time duration can range from 15 minutes to 2 hrs, it is easy to conduct the process in case of long-duration surgeries. The recovery time of this process is also less which means that RFA is extremely patient-friendly and causes minimum discomfort. These are some of the few reasons why the demand for RFA procedures is increasing leading to high demand for the associated devices.

Some patients who have undergone the medical treatment experience mild swelling or numbness in the area the procedure was carried out on. Although these side effects subside in a few hours, the patient may register slight discomfort during the period which could restrict market expansion. Another, rare but possible and serious side effect could be bleeding in the section where the probe was inserted. The chances of such events are relatively low but not nil.

The global market is anticipated to register high growth opportunities due to the increasing investments in the development of new and better RFA devices as the demand for the procedures has increased rapidly in the last couple of years. For instance, in 2012, the Korean Society of Thyroid Radiology (KSThR) launched a thyroid-dedicated RFA device which has since then gained extreme popularity in the treatment of thyroid patients. Increasing product awareness and technique could further propel the demand for the technique and devices used in the process.

In a recent study published on the National Library of Medicine portal, cases were examined to understand the impact of RFA during the treatment of ductal pancreatic carcinoma. After analyzing the results, it was concluded that the majority of the postoperative complications were related to massive bleeding, septic shock, pancreatic fistulas, and portal thrombosis.

The concerns were also related to the palliative surgery in case double or single bypass surgery was carried out. These factors currently pose a major challenge for the global market players since in certain situations such complications can take serious turns putting the patient’s life in danger.

The global radiofrequency ablation devices market is segmented based on application, type, product, end-user, and region

Based on application, the global market divisions are cardiology & cardiac rhythm management, surgical oncology, and gynecology. In 2021, the highest growth was registered in the surgical oncology segment due to the growing use of the RFA technique to eliminate and eradicate cancerous tissues in the patient's body. As per official statistics, more than 1 million biopsies are conducted annually with the help of fine-needle instruments in the radiofrequency ablation processes. As the infrastructure for cancer treatment and detection grows globally, the demand for RFA devices is projected to generate higher revenue.

For instance, bipolar cautery forceps are time-saving, extremely safe, and simple to use. They are also equally effective as compared to higher-priced instruments like an ultrasonic scalpel. Usually, a catheter electrode in the RFA device delivers a high-frequency alternating current which is around 500 kHz between the tip and the indifferent electrode.

The global radiofrequency ablation devices market is projected to register the highest growth in North America owing to the high product and treatment awareness in the medical communities of the US and Canada. The extremely advanced healthcare and research infrastructure allow the players in the market to constantly invest in product innovation which is a major reason why RFA devices in the regional economies have found wide applications across medical issues.

In recent times, the US FDA approvals have increased drastically to meet the growing demand in the economy. For instance, in 2017, the agency approved the use of COOLIEF Cooled Radiofrequency (Cooled RF) thermal treatment. It is used for the treatment of mild to severe knee pain complaints arising due to osteoarthritis. Currently, it is one of the few treatment plans that completely cure knee pain.

The global radiofrequency ablation devices market is segmented as follows:

The global radiofrequency ablation devices market is projected to grow owing to the increasing demand for pain management treatments due to the increasing number of medical patients affected by different conditions.

2. What will be the value of the radiofrequency ablation devices market during 2022-2030?

According to study, the global radiofrequency ablation devices market size was worth around USD 3.59 billion in 2021 and is predicted to grow to around USD 10.21 billion by 2030 with a compound annual growth rate (CAGR) of roughly 11% between 2022 and 2030.

3. Which region will contribute notably towards the radiofrequency ablation devices market value?

The global radiofrequency ablation devices market is projected to register the highest growth in North America owing to the high product and treatment awareness in the medical communities of the US and Canada.

4. Which are the major players leveraging the radiofrequency ablation devices market growth?