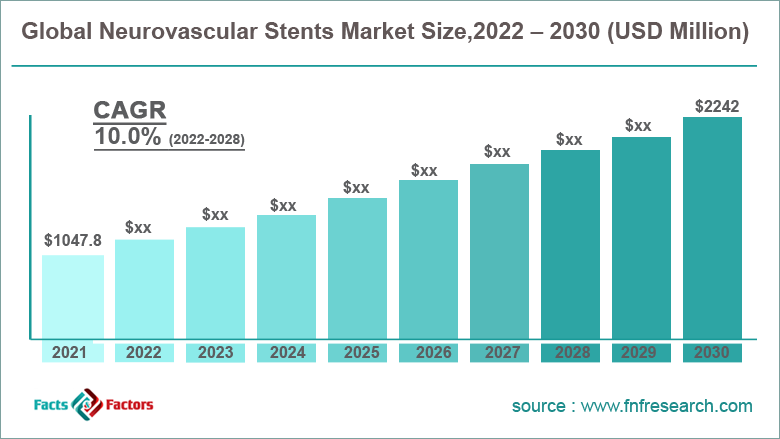 The neurovascular stent is either made-up of polymer or metal and it is a minute flexible device that appears to be like a tube. This device is used in treating different conditions of the brain like the formation of stenosis in blood vessels and for treating ischemic stroke. Neurovascular stents are capable of rapid restoration of blood flow due to which they are used in thrombectomy for cases of acute embolic stroke. The cases of ischemic stroke have led to an increased rate of mortality and disability among people. The vascular system of the brain may sometimes have complex disorders which can be treated with the help of neurovascular stents.

Even though the structure of these devices is complex, the stents are used for permanent implants. The patients undergoing such surgeries feel exhausted after the procedure and may return to their normal routine within a week. These stents are made with a metal named nitinol, which is a nickel-titanium alloy having a diameter of 10 to 20 millimeters (about 0.79 in). These stents are not like the drug-eluting ones that are used for cardiovascular diseases. 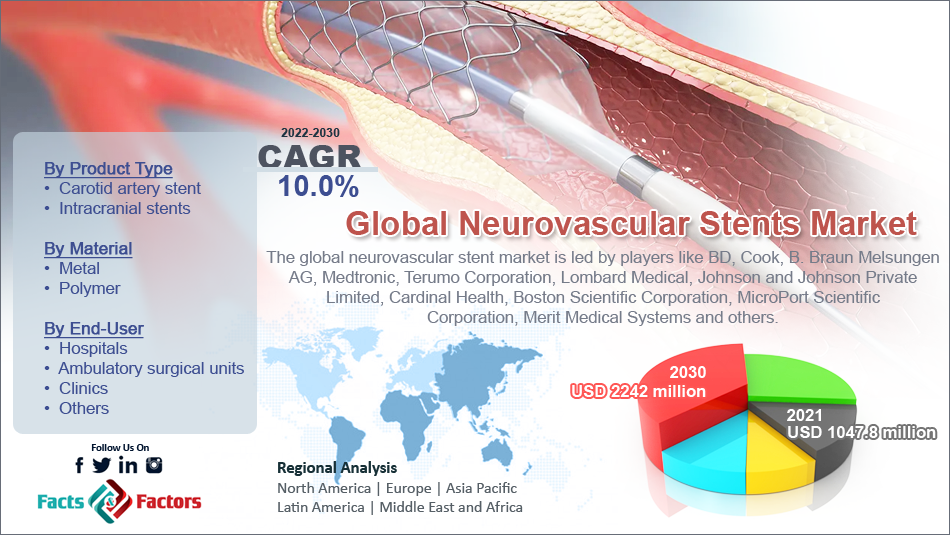 Growing cases of cerebral aneurysms and brain aneurysms in various nations across the globe have led to increased use of carotid artery stents and it has generated maximum revenue in recent times. A long hollow tube passes through the artery to reach the carotid artery which is narrowed in the neck. Many patients are opting for these less invasive surgeries, especially in the North American region. Weak artery walls and ruptured blood vessels of the brain lead to ischemic strokes.

The number of investments made for healthcare facilities in developing nations has also grown significantly in recent times. These surgical procedures are minimally invasive due to which the demand for neurovascular stents will grow significantly during the forecast period. A catheter is used for performing a small incision in the artery. The cases of complication and risk are reduced to a great extent because of such small incisions and all of these factors will drive the global neurovascular stents market growth.

Stringent regulatory policies adopted by the government of various nations will hamper the growth of the market in the long run. The unavailability of good healthcare infrastructure and lack of skilled professionals will restrain the market growth. The standardization and approval of the new innovative products is an expensive and lengthy procedure, and it will impede the market growth

The complications and the risk associated with the use of neurovascular stents are reduced to a great extent due to the use of newly launched products and innovative products in the market. These products make the procedure minimally invasive as compared to the traditional procedures used by surgeons in the past. Favorable reimbursement policies adopted by patients in developed regions across the globe will provide good opportunities for the growth of the global neurovascular stents market. These procedures have a success rate of 89% and this serves to be a major opportunity for the growth of this market.

The market growth will be obstructed due to the high cost of the products used in these minimally invasive procedures. Developing economies will suffer to a greater extent as these surgeries are extremely expensive. The reimbursement policies in developing nations are not as favorable as the ones provided in developed nations across the globe.

The global neurovascular stents market is segmented on the basis of product type, material, end-user, and region.

The global market segments based on types are the intracranial stents segment and the carotid artery stents segment. The carotid artery stent market is expected to have a larger market share and it will grow at a compound annual growth rate of about 5.8% in the coming years. The cases of cerebral aneurysms and brain aneurysms have increased in recent times. These tents are placed in the arteries permanently. The need for these neurovascular stents has increased in recent times due to the technological advancements taking place. The need for intracranial stents has also grown to a great extent and it is estimated to project a higher compound annual growth rate in the long run.

Based on the end user, the global market segments are the hospital segment, ambulatory surgical units, and others. The largest share will be held by the hospital segment, and it will grow at a compound annual growth rate of 5.7%. Hospitals provide minimally invasive surgeries for several diseases and make use of technologically advanced products. Hospital procedures also support reimbursement policies and provide better healthcare facilities. Quality treatments and cost-effective treatments are provided at the ambulatory surgical units due to which the preference of the patients for these centers has also grown in recent times.

By material, the market is divided into metal and polymer. Based on material, the metals segment is expected to generate maximum revenue in the long run as these stents provide better visibility and they are more resistant as compared to the other materials. Metal stents also provide biocompatibility due to which they are preferred in many procedures. Sudden closure of the vessel is prevented with the help of metal stents, and it is extremely favorable for the insertion of the balloon.

The global neurovascular stents market is expected to grow with the highest compound annual growth rate during the forecast period. 38% of the share was held by North America in the year 2021. Growing cases of stenosis and malformation are the leading cause of market growth.

Technological advancements in the products and treatments offered in the neurovascular stents market will drive market growth. Growing awareness about the availability of advanced treatments for ischemic stroke and other kinds of cerebral disorders will increase the demand for neurovascular stents in the Asia-Pacific region. By 2030, China which is the second largest economy in the world is expected to have a market worth USD 387 million.

The global neurovascular stents market is segmented as follows:

1. Which key factors will influence the Neurovascular stents market growth over 2022-2030?

The global Neurovascular stents market is projected to grow owing to the increasing demand for less invasive surgical procedures like embolization, coiling, stenting, and angioplasty. Better results are obtained with the help of these procedures as compared to traditional surgeries. The increasing prevalence of brain aneurysms and ischemic strokes will impede market growth.

3. Which region will contribute notably towards the Neurovascular stents market value?

The global Neurovascular stents market is anticipated to be led by North America in the coming years owing to the several prominent market players that make investments in research and development activities and introduce technologically advanced and innovative products.

4. Which are the major players leveraging the Neurovascular stents market growth?