Musculoskeletal systems comprise body organs like ligaments, cartilage, bones, connective tissues, and tendons. The skeleton is a necessary framework for soft tissues and muscles. These components together support the body weight and help in maintaining posture and body movement. Different types of conditions and disorders can cause issues in the musculoskeletal system.

Factors like birth defects, injuries, aging, and other diseases influence the movement of the body and pain. There are 6 main components of the system. The first is bones. They differ in size and shape but each one of them is necessary for supporting the body, protecting the organs, and tissues, and storing calcium. They also regulate the production of blood cells. They work together with ligaments, tendons, muscles, and connective tissues.

One such tissue is cartilage which is used to provide cushioning to the bones present inside the spine, ribcage, and joints. They can also be present in the pelvis, lungs, nose, and ears. Joints are formed when bones come together. Some may have a larger range of motion while some may not rotate, like elbow bones. Muscles are made of a large number of stretchy fibers coming together. They are used to carry out normal day-to-day tasks like talking, writing, and swallowing. Ligaments and tendons are an equally important part of the musculoskeletal group. 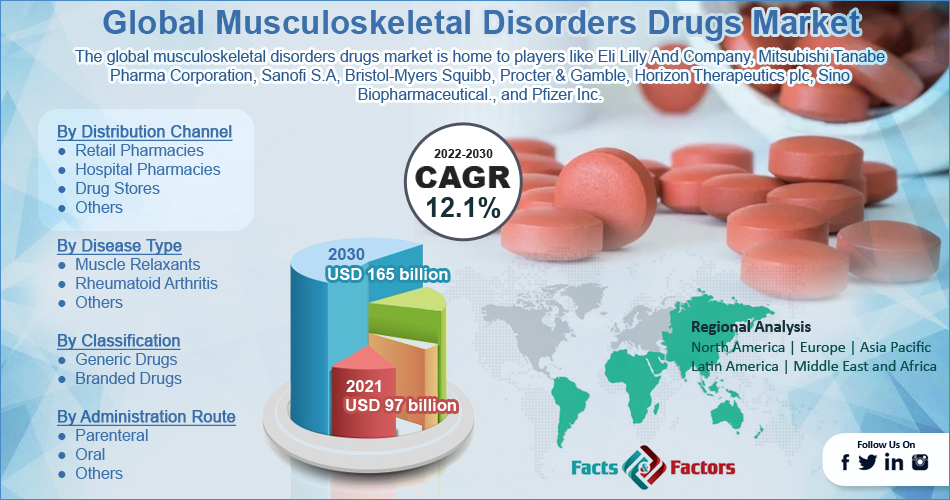 The global musculoskeletal disorders drugs market is projected to grow owing to the increasing number of elderly populations across the world. Although there are multiple factors that can influence the onset of the disorder, it is most commonly observed in people aged over 60 years. Due to the age, the duration required to cure the issues is relatively longer and limited resources, which means that the risk associated with the illness is very high in senior citizens.

As per the estimates by the World Health Organization (WHO), 1 in every 6 people will be over the age of 60 years by the end of 2030. The organization has also claimed that the pace of aging has become faster than it was in the past between 2015 and 2050, the elderly population is expected to double between 12% and 22%. Some countries have already recorded a high percentage of the elderly population.

For instance, in Japan, the number is as high as 30%. The most common musculoskeletal disorder in people over 60 years of age is osteoarthritis (OA) which is highly prevalent in the male population at 90% and in women, it is around 80%. Due to the correlation between age and muscle-related disorders, the drugs and medical care related to these diseases are expected to grow at a high CAGR.

The global market may face growth restrictions owing to the increasing doubts amidst the medical unit about the effectiveness of the drugs or medical therapies used to treat the disorder. For instance, a recent study has claimed that non-steroidal anti-inflammatory drugs (NSAIDs), one of the most commonly used drugs for musculoskeletal disorders, could be making the condition worse. However, more research is needed to come to a conclusion. Most of the drugs included in the category are naproxen, ibuprofen, and aspirin.

The global musculoskeletal disorders market is anticipated to witness high growth opportunities due to the growing investments in research & development of new drugs that can control the side effects associated with the current drugs in use. As the medical and healthcare sector is extremely important for the survival of living organisms, the industry is witnessing a surge in interest from private and government bodies to conduct large-scale research on the development of more effective drugs as the approval regulations from the food administration and drug authorities become more strict.

Drugs associated with the treatment of musculoskeletal disorders are expensive, rendering them unaffordable for a large segment of society, especially in underdeveloped or developing economies. There is also a significant gap between the demand and supply of necessary healthcare infrastructure which means that quality healthcare remains inaccessible to the majority of the global population.

Based on distribution channel, the global market segments are retail pharmacies, hospital pharmacies, drug stores, and others. The global market witnessed the highest growth in retail pharmacies as the demand for the drugs increased dramatically during Covid-19. Various inflammatory molecules associated with Covid-19 infection like IL-17, IL-1β resulted in a decreased response of the muscles and reduced endurance along with an increase in bone fragility. There are more than 150 types of musculoskeletal diseases that can severely impact the proper functioning of the systems involved.

The global musculoskeletal disorders drugs market is projected to witness the highest growth in North America owing to the advanced healthcare infrastructure of the US and Canada. As these regions are equipped with exceptionally high standards of medical care, more people have access to quality drugs.

Other factors like medical reimbursement policies, easy availability, and access to prescription drugs contribute to regional growth. The U.S. FDA, the country’s regional drug administration authority, has increased the number of approvals in the last few years owing to the growing efforts undertaken by the market players to research and develop high-grade and effective medicines. The institute, at the same time, is stringent with its policies which means that only safe products circulate in the market. In 2021, the Center For Drugs Evaluation and Research approved more than 50 types of new drugs.

The global musculoskeletal disorders drugs market is segmented as follows:

The global musculoskeletal disorders drugs market is projected to grow owing to the increasing number of elderly populations across the world. Although there are multiple factors that can influence the onset of the disorder, it is most commonly observed in people aged over 60 years.

2. What will be the value of the musculoskeletal disorders drugs market during 2022-2030?

According to study, the global musculoskeletal disorders drugs market size was worth around USD 97 billion in 2021 and is predicted to grow to around USD 165 billion by 2030 with a compound annual growth rate (CAGR) of roughly 12.1% between 2022 and 2030.

3. Which region will contribute notably towards the musculoskeletal disorders drugs market value?

The global musculoskeletal disorders drugs market is projected to witness the highest growth in North America owing to the advanced healthcare infrastructure of the US and Canada. As these regions are equipped with exceptionally high standards of medical care, more people have access to quality drugs.

4. Which are the major players leveraging the musculoskeletal disorders drugs market growth?