[224+ Pages Report]  According to the report published by Facts and Factors, the global e-KYC market size was worth around USD 1571.12 billion in 2021 and is predicted to grow to around USD 2792 billion by 2030 with a compound annual growth rate (CAGR) of roughly 21.55% between 2022 and 2030. The report analyzes the global e-KYC market drivers, restraints/challenges, and the effect they have on the demands during the projection period. In addition, the report explores emerging opportunities in the e-KYC market.

E-KYC is also known as paper KYC and stands for digital or electronic verification of customer information. KYC is the abbreviated form of ‘know your customer’ and it is a compulsory process for institutes that deal in any sort of financial transaction. The KYC process is used for the identification and verification of clients' reorganization or identity when opening an account that will be used for financial dealings.

With growing commercialization, there has been a steady growth in the number of identity theft, identity and signature falsification along with phishing activities. These incidents have led the solution providers to create various secure ways of eKYC that have zero room for any offense or crime related to counterfeiting personal information. The global market is influenced by various regulations including but not limited to terrorist financing and anti-money laundering. 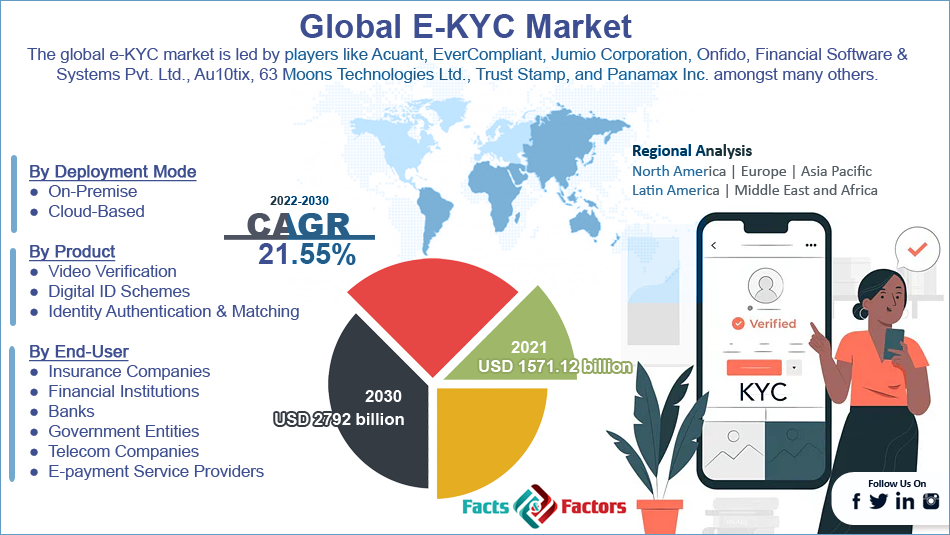 The global e-KYC market is projected to grow owing to the stringent government laws and regulations related to customer identification. KYC is important as it helps in preventing money laundering or financing of any criminal or terrorist activities. KYC guidelines help in the prevention of banks from being used against any anti-social act. In India, the e-KYC guidelines are laid down by the Reserve Bank of India, the country’s national bank and it is about the recommendations provided by the Financial Action Task Force (FATF) of the country which deals with Combating Financing of Terrorism (CFT) and Anti Money Laundering (AML). This gives a preview of the importance of customer identity verification.

Other factors like the adoption of advanced technology and the benefits that eKYC provides to the customer as well as the institution using the systems are expected to help the global market generate more revenue. Financial intuitions have been at the forefront of leveraging technological systems to create a user-friendly experience which helps in reducing accessibility concerns amongst clients that may not be able to physically visit the unit due to various reasons.

Although there are several benefits to eKYC, there are certain elements that impact the global market growth and the major concern is growing incidents of data theft. As electronic KYC makes use of digital systems, there have been multiple cases in which customer data was targeted.

The total number of data breaches in India reached 86 million as of November 2021 and the country ranked third in the list of global data breaches. Cloud systems are highly vulnerable to cyber-crimes and customers may be hesitant in providing details over electronic mediums.

The world is moving toward digitization at an exponential rate. There is a growing rate of voluntary efforts undertaken by corporations and businesses to move to digital technology and reduce the dependency on paper, which is currently a growing environmental concern.

E-KYC greatly encourages this move as there is no requirement for the paper to process the identification verification process. The largest segment that is following the trend is the financial segment as banks have drastically shifted to advanced technological systems for almost all associated processes.

One of the critical challenges the global market may face is the lack of awareness about the benefits of e-KYC, especially for the elderly population or people who are not comfortable with technology or are used to working in old paperwork ways. Although it cannot be generalized, senior citizens who have not been exposed to digital technology could be hesitant in adopting the new means as they may have inhibitions. For instance, a recent survey by No Isolation reported that nearly 77% of the senior population in the survey mentioned that they need external assistance to navigate through tablets or smartphones.

The global e-KYC market is segmented based on deployment mode, product, end-user, and region

Financial units, government sectors, or any other end-users operating in the market generally trade in large monetary dealings and hence tend to spend heavily on internal systems that can help them safeguard customer information and other crucial data. In the last decade, the Bank of America has consistently spent over USD 3 billion on initiatives related to new technology.

Based on end-user, the global market is segmented into insurance, companies, financial institutions, banks, government entities, telecom companies, and e-payment service providers. Banks are the largest consumers of e-KYC followed by telecom companies and e-payment service providers. e-KYC is one of the mandated processes for any institute that works with financial dealings, especially banks. Billions of bank accounts are created every year across the world and every new account is linked with KYC either digitally or non-digitally. As of March 2017, India had more than 157 crore bank accounts.

The global e-KYC market is expected to be led by North America in the coming years as it has in 2021. The US is projected to generate the highest revenue in terms of regional growth due to the growing emphasis on fraud detection and anti-money laundering programs in the country. The US is one of the most technically advanced countries as it is home to some of the biggest digital program developers catering to multiple industries and their specific needs.

The growing incidences of data theft and cyber-attack especially on medium or small-sized firms could further lead to investments in the development of even more advanced systems that can provide higher safety. The high number of technically-inclined population encourages companies like banks, financial institutes, and digital payment gateways to use computerized systems to reduce dependence on manpower for monotonous tasks. Growth in the Middle East could be augmented by the increasing efforts by government regulatory bodies to digitize as many sectors as possible.

The global e-KYC market is segmented as follows:

KYC is 'Know Your Customer' is the procedure of authenticating a customer’s identity. The purpose of the KYC guidelines is to prevent criminal elements of money laundering activities such as identity theft and financial fraud. It is mandated to do KYC validation while opening bank accounts, pay over a certain amount, and buy and sell many investments. This paper-based process of ‘know your customer’ was costly on businesses operating in the financial industry, especially smaller financial institutions where compliance costs are inexplicably heavy. With the introduction of the eKYC, electronic and online KYC process, the verification process needed weeks for completion has been achieved in some seconds. This is a remote, paperless process that minimized the costs and traditional bureaucracy required for KYC.

The increase in the number of smartphone users and along with the rise in digitization among financial sectors has fueled the market growth in recent years. Moreover, increasing cloud adoption is expected to create new opportunities for the eKYC market in France. Cloud computing can help banks in transforming business processes and enhance their ability to grow in new sectors or regions. With cloud computing, banks can have much better able to provide consistent service to customers across branches and geographies. Further, governments are also aiming to digitize all of their administrative processes and are focusing on securing digital identity processes and facilitate people's access to digital services. This has influenced companies to enter the French eKYC market. However, security issues regarding the storage of data are expected to hamper the eKYC market in France.

In terms of end-user, the bank's segment dominated the France e-KYC market, accounting for a market share of 34.56% in 2019. The use of e-KYC by banks has grown as there has been an increase in the number of online banking users and a rise in the market penetration rate in France. The continuous increase in the number of online as well as mobile banking users led to the creation of a new model for banks, including digital banking companies. Online or digital banks offer various services apart from traditional banks. These services are accessible via smartphones. Digital banks offer easy access and communication with bank-like online messaging services, etc. Such trends have driven the rise of digital banks in France. Some of the main reason for the use of digital banks is checking account balance, transferring money between accounts, making online payments, paying bills, etc. Such features of digital banks are attracting users of all ages. An increase in the number of users has driven the need for digital verification and identification services and this trend has been driving the e-KYC market in France. Moreover, based on end-users, the e-payment service providers segment is anticipated to grow at the highest pace over the forecasted period, registering a CAGR of 23.1%. Online or e-payment service providers are third-party companies that aid business owners in accepting a wide range of online payment methods, like online banking, debit cards, credit cards, cash cards, e-wallets, etc. Such companies use KYC for the merchant onboarding process. Companies have their own KYC policies. With advancements in technology, there has been a significant change in the payment industry in France as well as around the world. As the number of mobile payment users has increased rapidly in recent years, the need for threat detection during the customer account opening process has also increased. This has driven the need for KYC procedures while the customer onboarding process, which is driving the need for e-KYC services among e-payment service providers. Further, the number of e-money purchase transactions in France has increased significantly in the last decade. In 2009, the number of e-money purchase transactions was nearly 36 Million in France and the number has reached a value of approximately 62 Million in 2019. Thereby, certain trends boost the adoption of e-KYC services among e-payment service providers and are expected to maintain the same market during the analysis period.

The global e-KYC market is projected to grow owing to the stringent government laws and regulations related to customer identification. KYC is important as it helps in preventing money laundering or financing of any criminal or terrorist activities.

3. Which region will contribute notably towards the e-KYC market value?

The global e-KYC market is expected to be led by North America in the coming years as it has in 2021. The US is projected to generate the highest revenue in terms of regional growth due to the growing emphasis on fraud detection and anti-money laundering programs in the country.

4. Which are the major players leveraging the e-KYC market growth?