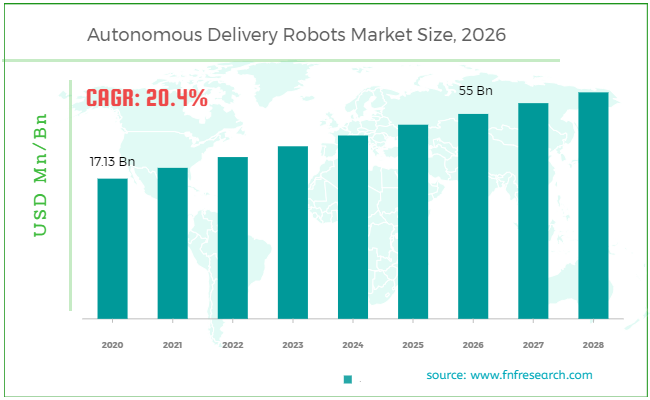 These robots have been programmed to deliver various types of items from one area to another. Couriers, food, supplies, and other goods are among the items to be delivered. Delivery methods have been changed thanks to autonomous delivery robots. They have the benefit of being a very efficient and cost-effective distribution method. Retail, hospitality, healthcare, logistics, and other industries employ autonomous delivery robots the most.

The final phase of product delivery, from the warehouse or distribution center to the end-user, accounts for over 28% of the entire transportation cost in most supply chains. Congestion in urban areas, isolated places, erroneous or erroneous address info, difficult-to-find destinations, and a severe labour scarcity for supplying on-demand delivery services are all variables that affect last-mile delivery. All of these issues are preventing this phase's optimization. Customers in the realm of e-commerce are not just demanding, but they also like to buy high-quality goods at a reduced price. Autonomous delivery robots in e-commerce will not only provide customers with better convenience at a lower cost, but they will also fundamentally alter the competitive landscape.

The current COVID-19 pandemic has shone a spotlight on delivery robots for contactless package deliveries around the world, and strong market demand has pushed delivery robot developers to launch large-scale operations in a number of US locations. During the pandemic, the deployment and adoption of delivery robot technology are projected to strengthen the market for delivery robots. Food is also being delivered by delivery robots from restaurants. Delivery robots have been in use for several years; however, during the epidemic, end users, including restaurants, grocery stores, and other delivery service organizations, have shown a significant increase in interest in them.

North America, Europe, Asia Pacific, and the Rest of the World make up the Global Autonomous Delivery Robots Market. In 2020, North America held the highest market share, and it is expected to grow at a strong CAGR over the forecast period. Many of the leading market vendors are based here, and the region also includes a large number of manufacturers and start-ups devoted to the advancement of autonomous delivery robotic technology. In addition, when compared to other parts of the world, the region has a relatively high penetration of autonomous delivery robots among diverse end-users.

The major market players in the autonomous delivery robots market are Eliport, Boston Dynamics, Robomart, Panasonic System Solutions Asia Pacific, Savioke, Starship Technologies, JD.com, Amazon Robotics, Robby Technologies, and Nuro among others. From January 2017 to December 2020, these companies used a variety of growth tactics to achieve growth in the delivery robots’ market, including expansions, partnerships, agreements, and collaborations, which helped them to expand their product portfolio and broaden their client base.

By Number of Wheels Segmentation Analysis

Which key factors will influence the Autonomous Delivery Robots Market growth over 2021-2028?

What will be the value of the Autonomous Delivery Robots Market during 2021-2028?

According to Facts and Factors research report, the global Autonomous Delivery Robots Market accrued earnings worth approximately XX (USD Billion) in 2020 and is predicted to gain revenue of about XX(USD Billion) by 2028, is set to record a CAGR of nearly XX% over the period from 2021 to 2028.

Which region will contribute notably towards the global Autonomous Delivery Robots Market value?

North America will contribute lucratively towards the global market value over the estimated timeline. The regional market surge is subject to large-scale presence of giant participants in countries such as the U.S. Apart from this, favorable compensation policies along with high acceptance of new Autonomous Delivery Robots Market will drive regional market trends. With regional governments enforcing strict laws pertaining to drug abuse, the market for Autonomous Delivery Robots Market in North America is set to witness exponential growth over years to come. Legalization of cannabis in countries such as Canada and U.S. through passing of acts in parliament is likely to enlarge scope of Autonomous Delivery Robots Market in North America over coming decade.

Which are the major players leveraging the Autonomous Delivery Robots Market growth?

[221+ Pages Report] According to Facts and Factors, the global eDiscovery market was valued at USD 9.50 billion in 2021 and is predicted to increase at a CAGR of 6.40% to USD 13.78 billion by 2028. The study examines the market in terms of revenue in each of the major regions, which are classified...