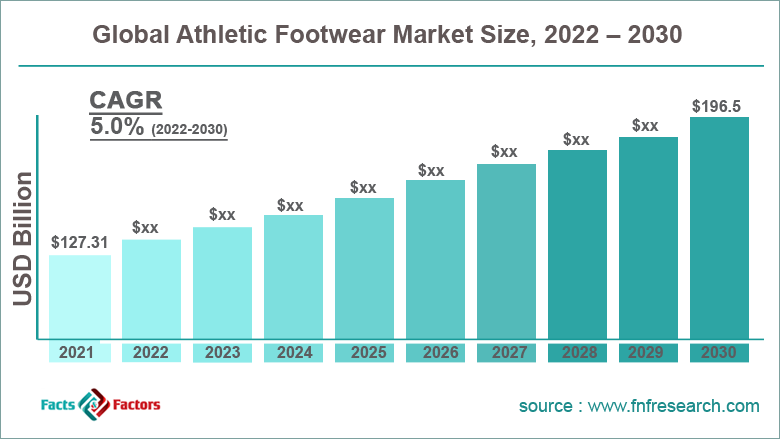 Athletic footwear is defined as shoes designed specifically for recreational activities or sports like exercising, and aerobic dancing. Athletic footwear is designed to meet the requirements of sports personalities. When participating in any physical activity, footwear becomes an important part that helps the person enhance final performance. They not only provide high-grade comfort in ways that assist in delivering the required performance support to the person wearing it.

During any sport, an athlete is exposed to tremendous pressure on the legs including the foot and ankle. Athletic shoes can help in replacing this pressure with more comfort thus allowing the person to focus entirely on performance and there are no distractions caused. Another important aspect of athletic footwear is the prevention of injuries which is extremely common during any sports event.

There are different types of athletic footwear depending on the sports they are supposed to be used for. Since every activity has its own set of demands from the player, the corresponding athletic footwear has to be designed keeping in view the final assistance the sportsperson may require. For instance, shoes worn for running have to simplify or promote foot strength, controlled motion, joint flexion in the lower extremity joints, and soft foot strikes. 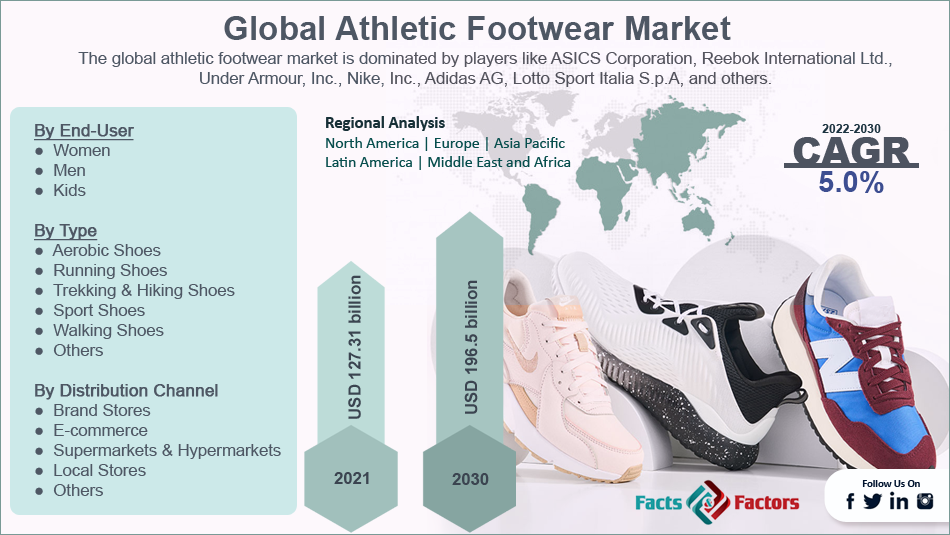 The global athletic footwear market is projected to benefit from the rising level of awareness amongst the population about the importance of physical health encouraging them to participate in some form of sports or recreational activity. Athletic footwear is not designed only for people who play at competitive levels but any person who has undertaken any form of physical exertion ranging from slow walking or sprinting to other sports as well. With the growing number of desk jobs globally, people are being encouraged to ensure that the body receives some form of physical movement throughout the day and the population has started taking physical health seriously.

In 2020 and 2021, when most of the world was witnessing strict lockdown impositions, many people resorted to home workouts using social media or online trainers to relieve the stress caused by Covid-19 and its impact. A recent Finder survey representing national data of Australia recorded that nearly 32% of Australians have a gym membership. Other factors like corporations initiating workout programs at offices for employees, increasing the opening rate of sports centers, and growing disposable income could also promote global market growth.

Athletic footwear is designed with accuracy to meet the demands of a sports activity. Multiple resources are invested during the research and production phase of athletic footwear which is the main reason why generally such shoes are more expensive than casual or everyday shoes. The average price of running shoes currently lies between USD 115 to USD 120 which may not be affordable for medium to low-income groups thus restricting the global market growth.

The athletic footwear industry players have found a lucrative way of attracting more consumers to their brands. They have started investing in popular sports or non-sports personalities and making them the face of the brand automatically drawing a large number of loyal followers of the personality toward the brand. This is an excellent advertising method employed by corporations working in the segment. For instance, when Puma, a giant in the industry, signed Virat Kohli, an Indian cricket player, the company's growth revenue jumped to 23% in the fiscal year 2019.

There is a growing number of counterfeit sellers of athletic footwear in the global athletic footwear market, especially in the e-commerce segment. Most of these counterfeit products are extremely close in appearance to the original brand making it difficult for consumers to distinguish between the two. This is a major challenge for the global athletic footwear market players since many companies clock in high losses due to presence of the non-original items in the market. For instance, a recent report pointed out that Nike loses almost 10% of its revenue due to counterfeit products.

The global athletic footwear market is segmented based on end-user, type, distribution channel, and region

The global athletic footwear market is anticipated to register the highest growth in North America mainly driven by the high product penetration and easy accessibility to the products. Countries like the US and Canada are home to some of the most dominating players in the global market including Nike, Under Armor, and Adidas, three of the biggest names with the highest sales revenue consistently recorded over the last years.

Due to the superior grade quality of the product along with exhaustive advertising and marketing strategies adopted, these brands have created a massive following of dedicated consumers across the globe. Air Jordan, Nike’s segment of modern basketball shoes created in collaboration with Michael Jordan, the world’s most popular basketball player, is one of the largest selling product segments for Nike generating more than USD 2 to 3 billion every year since its first launch in 1984.

The global athletic footwear market is segmented as follows:

1. Which key factors will influence athletic footwear market growth over 2022-2030?

The global athletic footwear market is projected to benefit from the rising level of awareness amongst the population about the importance of physical health encouraging them to participate in some form of sports or recreational activity.

3. Which region will contribute notably towards the athletic footwear market value?

The global athletic footwear market is anticipated to register the highest growth in North America mainly driven by the high product penetration and easy accessibility to the products.

4. Which are the major players leveraging the athletic footwear market growth?