A fluoropolymer is a polymer based on fluorocarbons that exhibits multiple bonds between carbon and fluorine. The main characteristics of fluoropolymer include high resistance to bases, acids, and solvents. One of the most popular forms of fluoropolymer is called polytetrafluoroethylene and is sold under the brand name Teflon which is trademarked by the DuPont company. The discovery of polytetrafluoroethylene was accidental and made by Roy J Plunkett, who was recently hired by DuPont. Since fluoropolymers share multiple properties with fluorocarbons, they are highly resistant to Waals and van der force.

This is one of the major reasons why they are non-stick and help in reducing friction. Since the presence of multiple carbon-fluorine bonds, the chemical compound is highly stable. Mechanically, fluoropolymers can be characterized as thermoplastics and thermosets. They can also exist as copolymers or homopolymers. Fluoropolymer coatings are created by blending higher-grade fluoropolymer lubricants and resins. They are made using dry film lubricant. 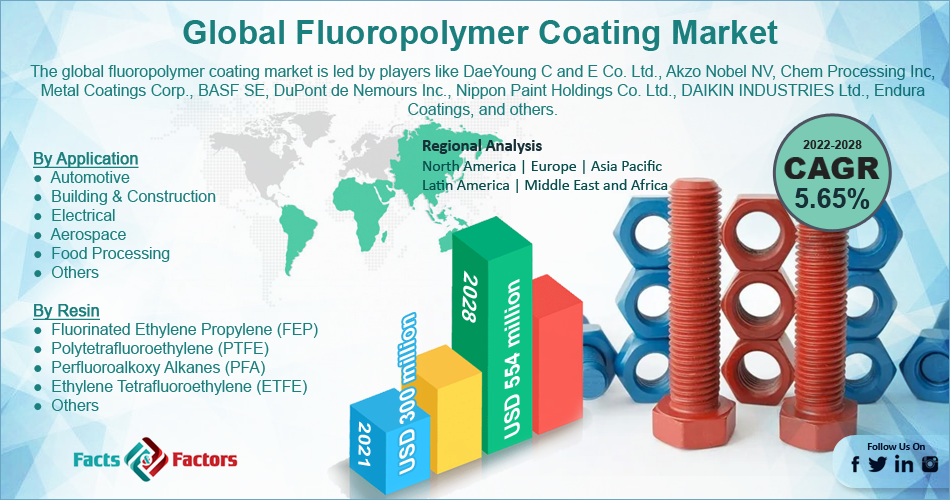 The global fluoropolymer coating market is projected to grow owing to the increasing use of the coating compound in the building and construction industry. The chemical is used to coat metal surfaces including doors, storefronts, panel systems, skylights, and windows because they offer high resistance to corrosion and are deemed as one of the few cost-effective products with high output. By applying a layer of fluoropolymer coating, the surface becomes resistant to wear and tear while also imparting the object with exceptionally low friction which means that the coated surface becomes extremely smooth, a desirable trait of any object or surface in the building or construction sector.

As the population grows, demand for residential housing is projected to grow simultaneously which may further be propelled by the growing investments in the building sector across remote locations in a bid to urbanize as many regions as possible. Regional governments have increased investments in developing local infrastructure to help the economy grow as well as attract as many foreign investors as possible. As per the latest reports, the Canadian government plans to spend over USD 33 billion solely on infrastructure over the next 11 years.

Since direct exposure to chemicals can lead to negative health impacts, governments have strengthened the policies surrounding the use of chemicals that become a part of the everyday life of the general population. Various guidelines are issued by the regional governments that describe the exact quantities of the chemicals that should be used and in places they can be used. Although they are described as low in hazard, every brand that sells fluoropolymer coatings has to undergo required tests to prove the exact content of the compound. This could restrict global market growth as it can impact the entry of small-size companies in different regions.

As consumer awareness has increased at a rapid rate, the demand for eco-friendly products has seen a surge in recent times as more customers choose the products consumed in any form with responsibility. Fluoropolymer coatings are generally considered safe to be used when in appropriate quantities which could provide ample growth opportunities. Other factors like the entry of large-scale corporations in newer markets as well as the emergence of local players are expected to help the global fluoropolymer coating market enhance its reach thus positively influencing the economy. For instance, in 2021, DuPont announced a new agreement for completing the acquisition of Roger Corporation for USD 5.2 billion.

The global market players may face challenges due to the presence of various substitutes in the market that are not as effective as fluoropolymer coatings but are less expensive and can work as temporary solutions. Some of these alternatives include the use of parylene coatings which is conforma in characteristic atomic layer deposition (ALD) belonging to the family of chemical vapor deposition also known as CVD. In the market, there is growth in the number of low-quality compound providers or counterfeit products which could lead to the global market players facing heavy losses due to the loss of customers.

The global fluoropolymer coating market is segmented based on application, resin, and region.

Based on application, the global market segments are automotive, building & construction, electrical, aerospace, food processing, and others. In 2021, the global market witnessed the highest growth in the building and construction segment due to the benefits offered by the chemical compound owing to its properties like low polarization and high electronegativity. Growing applications in developing economies are projected to help the segment generate higher revenues. In 2021, the building & construction industry of Europe was estimated at a value of USD 2993 billion.

Based on resin, the global market segments are fluorinated ethylene propylene (FEP), fluorinated ethylene, polytetrafluoroethylene (PTFE), perfluoroalkoxy alkanes (PFA), ethylene tetrafluoroethylene (ETFE), and others. In 2021, the global market witnessed the highest revenue in the polytetrafluoroethylene (PTFE) segment due to wide applications of the compound in the manufacturing of valves, gaskets, wires, and bearings as well as to coat it on insulated transformers. PTPE is used extensively in the cookware manufacturing sector which generated around USD 24 billion in revenue in the previous year.

The global fluoropolymer coating market is anticipated to be led by North America in the coming years owing to the high production and consumption rate of the compounds across industries including one the building and construction sector of the United States, one of the most valuable industries. In 2021, the regional industry stood at a market value of USD 2 trillion due to the ongoing construction projects for commercial and residential spaces.

The industrial growth is attributed to the increasing investments in housing, transport, electricity, and other related sectors. As the US government invests heavily in renewable sources of energy, the growth in the building and construction sector will grow multifold. For instance, in the recent March 2022 budget allocation by the Biden government, around USD 284 billion is allocated for military-related construction and affairs related to veterans in the country.

The global fluoropolymer coating market is segmented as follows:

1. Which key factors will influence fluoropolymer coating market growth over 2022-2028?

The global fluoropolymer coating market is projected to grow owing to the increasing use of the coating compound in the building and construction industry. The chemical is used to coat metal surfaces including doors, storefronts, panel systems, skylights, and windows because they offer high resistance to corrosion and are deemed as one of the few cost-effective products with high output.

According to Facts and Factors, the global fluoropolymer coating market size was worth around USD 300 million in 2021 and is predicted to grow to around USD 554 million by 2028 with a compound annual growth rate (CAGR) of roughly 5.65% between 2022 and 2028.

3. Which region will contribute notably towards the fluoropolymer coating market value?

The global fluoropolymer coating market is anticipated to be led by North America in the coming years owing to the high production and consumption rate of the compounds across industries including one the building and construction sector of the United States, one of the most valuable industries.

4. Which are the major players leveraging the fluoropolymer coating market growth?