Technology, energy, analytics, access to the grid, and specialized services are all sold under the umbrella term "energy as a service" (EaaS). Environmental protection is seriously threatened by the problem of carbon emissions. With the growing use of renewable energy sources to provide electricity, decentralized energy distribution has been observed. Rapid industrialization drives up global energy demand and contributes to the depletion of fossil fuels in developing nations. The demand for renewable energy sources has increased as a result of the growing need to lessen our reliance on fossil fuels and reduce the carbon emissions that result from burning them. This, in turn, is expected to continue to drive the growth of the EaaS market over the course of the time period under consideration.

The COVID-19 pandemic has negatively impacted every industry. Since 2020, the majority of the world's nations have seen a dramatic increase in the number of impacted cases. The pandemic's aftermath caused instability in the economics of several quickly developing nations. The onset of this global epidemic has had an immediate impact on the EaaS business. Many countries and regions have seen a sharp reduction in commercial and industrial activity, which has decreased many vertical energy demands. The sharp decline in energy intake has limited the adoption of new technology around the world. 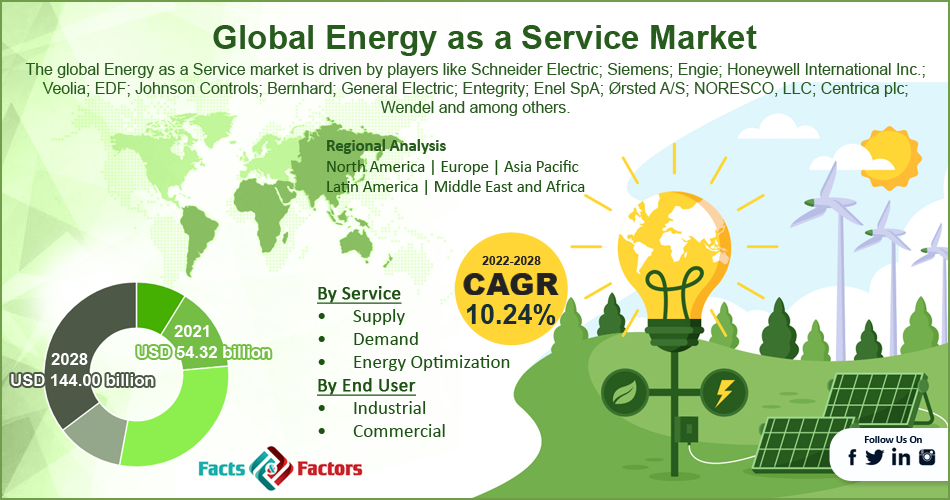 The principal goals of governing authorities in nations all over the world are to reduce greenhouse gas (GHG) emissions and the rising demand for energy. Following this, the installation of renewable energy sources is anticipated to increase significantly during the following ten years, which will result in the market's rise. The global energy as a service market size has been positively impacted by new energy targets that have been introduced by various governments to encourage the tendency toward sustainable electricity. For instance, by the end of 2023, Brazil wants 42.5% of its primary energy supply to come from renewable sources. Similar to this, the U.K. government intends to have around half of its electricity come from renewable sources by 2025, according to the carbon short analysis.

Energy produced by renewable energy sources requires a substantial investment. For instance, according to Bloomberg, from 2010 to 2019, investments in renewable energy sources totaled over USD 2.9 trillion. Only 8% of the world's energy is produced by solar energy, and 9% by wind energy. As a result, the majority of initiatives require the assistance of government-owned businesses. Additionally, governments only contribute a small portion of the total investment; the remainder is up to the business. The cost of the grid upgrade work, which calls for the installation of smart equipment at both the utility and customer ends, may restrain the growth of the EaaS market.

Peak energy demand is a result of the expanding population and increasing activities to increase rural electrification. The cost of funding, installing, owning, and managing the operation of an asset that produces energy is transferred from the end user to the service provider under the EaaS model. The market's development was aided by favorable regulatory rules that were implemented by various agencies to support low-carbon technologies. The development of new, high-value infrastructure projects and acceleration of urbanization have also increased the supply and demand of power from utilities.

The need for energy efficiency has been bolstered by the energy as a service model, allowing for the update of the newest technology without the need for an initial capital outlay. Owners of commercial buildings are apprehensive about entering into long-term financing arrangements or service procurement contracts with energy as a service provider. Customers could be unsure of whether to approach the contract as a service agreement or a lease because energy as a service owns and maintains the energy equipment. The worry of investing in an upgrade with the wrong cost, life span, or outcome may induce risk-averse clients to pause. The customer's confusion can be reduced by education on energy as a service contracts, which can also make communication between the many departments engaged in the decision-making process easier.

The global Energy as a Service market is segmented based on service, end-user, and region

Based on service, the market has been segmented into supply, demand, and optimization services. The demand services category is expected to grow at the quickest CAGR throughout the projected period, while the supply service sector held the greatest market share in 2021. Rising government initiatives to promote renewable energy together with the requirement for cost control and energy conservation are projected to favorably impact the segment's expansion in the next years. Demand services held the largest market share in 2021, and it is projected that they will hold that position throughout the forecast period. Consumers are searching for reliable energy sources without a grid due to rising rates. This element is anticipated to accelerate the segment's growth in the near future.

Based on end-user, the market has been segmented into commercial and industrial users. During the forecast period, the commercial segment is anticipated to increase at the fastest rate. The segment includes businesses including hospitals, educational institutions, information hubs, and airports, among others. Buildings alone account for more than 30% of total consumption in the commercial sector. According to the American Council for Energy-Efficient Economy (ACEEE), these organizations and establishments use more than 18% of the energy consumed by different American industries. Furthermore, lighting and heating consume 50% of the energy used in the commercial sector.

During the projection period, North America is anticipated to hold the largest share of the global energy as a service market, with the U.S. accounting for the majority of demand. The nation is well-known for having used EaaS in a number of industries. The area has embraced a number of projects, particularly in the business sector, that are anticipated to improve energy storage efficiency and lower operating costs. The area has also seen notable investment in the production, exploration, and refining sectors, which is expected to increase demand for energy as a service model in the upcoming years.

Furthermore, Europe's market benefits from supportive organizational and governmental policy frameworks that encourage the implementation of green energy solutions and considerable installation of power generation technology in various locations. Currently, among other nations, Germany, the U.K., and Italy are the main nations making significant contributions to the region's EaaS industry. Additionally, it is projected that rising investments and plans to strengthen and expand grid infrastructure networks to support the rising installation of renewable energy will further advance the business.

The global Energy as a Service market is segmented as follows:

Energy as a Service Market

1. Which key factors will influence Global Energy as a Service market growth over 2022-2028?

The market is driven by the rising potential of renewable energy, price volatility, and rising energy consumption are other significant factors driving growth.

3. Which region will contribute notably towards the Global Energy as a Service market value?

The global Energy as a Service market is anticipated to generate the highest revenue from North America due to the utilities in the region are undergoing a major operational transformation which includes decentralization, digitization and decarbonization.

4. Which are the major players leveraging the Global Energy as a Service market growth?