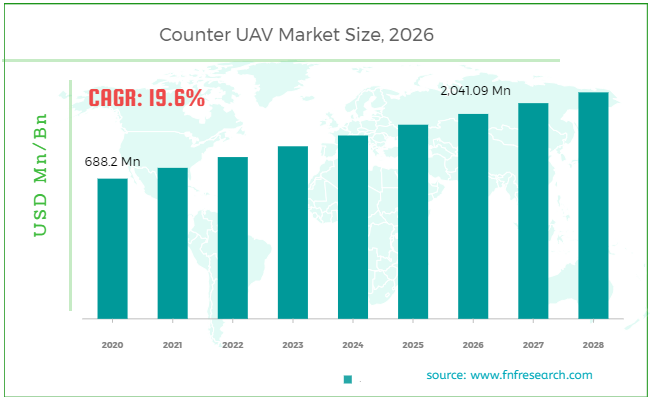 The counter unmanned aerial vehicle (UAV) market is rapidly increasing due to the unwanted misuse of drones throughout the world. It allocates with new emerging wrong activities of UAVs like terrorism, drug trafficking, and business surveillance. With the demanding use of drones, the number of security breaches by obscure drones at censorious infrastructure and peopled places has increased. This has stimulated the demand for countermeasures. The potential lawbreaker includes antinuclear groups, hobbyists, business and professional competitors, and terrorist organizations. At present, drones have become popular and readily available due to their cost-friendly. Logistics organizations use drones for express parcel delivery, while military groups use them for attacking suspected terrorists. Keeping view on past few years, there has been a fast growth in the all types of UAVs uses. In the United States, reports of unmanned aircraft sightings from pilots, citizens, and law enforcement have increased sharply. The FAA now records such reports more than 100 each month. This has concluded in security violations at some infrastructure which is critical and peopled places, which, in turn, is pushing the demand for anti-drone systems.

Anti-drone technology is relatively growing in the market, and technologies used to manufacture counter UAV systems are undergoing attentive R&D. Many market players bringing in these new technologies are planning to patent them. In addition to that, the value incurred in R&D is quite lofty considering the use of laser and other costly technologies. Hence, medium and small-sized market players cannot afford to develop and deploy anti-drone systems due to the requirement of the high initial investment.

The counter UAV or C-UAV market is propelling by the advancements in the potentialities of UAVs. Manufacturers providing counter UAV defense systems from militaries to other industries are heavily investing in it by developing newer ways to marker the threat from UAVs to ensure safety and security from terrorist activities. The growing use of UAVs in military forces will accelerate the growth of the C-UAV market. The counter UAV market is growing in terms of technological advancements. The rapidly rising demand for systems that come with radar, RFID scanners, electro-optical infrared for payload identification will drive the counter-UAV market in military applications.

The use of civil UAVs for agriculture and farming, weather and natural calamities monitoring, crude oil and gas inspection, aerial photography and filming industry, scientific research and power, and utility market identification, has increased worldwide. Since the utilization of such systems across various industries poses threats of hacking by terrorists and anti-social elements, the need for counter UAV defense and monitoring systems will significantly increase in this sector. The increasing hostile activities of UAVs flying close to commercial aircraft and airports create a vast demand for such systems for safety purposes. Categorization of such systems that do not hamper the normal functioning of the airport will drive the growth of the Counter UAV market.

The study provides a decisive view of the global counter UAV market by segmenting it based on system product type, end-user, technology, and platform. The system type segment is categorized into detection systems and detection & disruption systems. Ground-based C-UAV, Hand-held C-UAV, and UAV-based C-UAV are the product type segment of the global counter UAV market. To offers better target customer analysis, our analyst further bifurcates the end-user segment into military & defense, commercial, government, and others.  In addition, to understand the technology landscape, our analyst classified the technology segment by laser systems, kinetic systems, and electronic systems. Moreover, our report also analyzed platform segment by air, ground, and naval

Based on regions, the global counter UAV market can be divided into five main regions namely North America, Europe, Latin America, Asia Pacific, and The Middle East and Africa.

North America held the largest counter UAV market share and the region is also expected to manifest the highest growth rate during the forecasted period. This is mainly due to the acquisition of counter-drone systems by the United States DoD. In the last few years, the US government has been investing a lot in the counter-drone program. In July 2020, the armored force made an announcement that it was awarding DRS sustainment systems USD 190 million to develop, produce, and deploy the Mobile-Low, Slow, Small Unmanned Aircraft System Integrated Defeat System (M-LIDS). Additionally, at the start of 2019, the US Army also awarded a USD 118 million contract to SRC Inc. of Cicero to co-develop moving systems that counter small, less speedy, and low-flying range drones. In the year 2019, the secretary of defense ministry devolved the army to lead an effort to minimize redundancy in the development and fielding of various C-sUAS solutions by the services. Following the assigned work, the defense department may be narrowing the number of different counter-small UAV solutions deployed by the joint force from about 40 to eight. Said movement is anticipated to minimize redundancy and enrich the focus on the current systems. In April 2021, the United States air force released a request for proposals for the quick research, development, design and physical prototyping, actual demonstration, evaluation, and transition of technological things that can be used to counter small unmanned aerial systems. By the end of the year 2021, the United States air force may award the counter-UAV contract worth up to USD 500 million to provide the technologies to counter the threat of small, commercial purpose-made drones. The time period of performance for the contract is 06 years. On the contrary, illegitimate drone incursions at the airports and other critical infrastructure can result in safety issues, and they have raised concerns over the years, across several such sites in the US. Several trial tests were formed in the past years. With the technological advancement, counter-drone systems may be procured in large numbers by the US localized end users to protect critical infrastructure and assets of strategic importance over the upcoming years, which is too anticipated to drive the growth of the counter UAV market in the region in the future.

The global Counter UAV Market is segmented as follows:

Which key factors will influence the Counter UAV Market growth over 2021-2028?

According to Facts and Factors research report, the global Counter UAV Market accrued earnings worth approximately XX (USD Billion) in 2020 and is predicted to gain revenue of about XX(USD Billion) by 2028, is set to record a CAGR of nearly XX% over the period from 2021 to 2028.

Which region will contribute notably towards the global Counter UAV Market value?

North America will contribute lucratively towards the global market value over the estimated timeline. The regional market surge is subject to large-scale presence of giant participants in countries such as the U.S. Apart from this, favorable compensation policies along with high acceptance of new Counter UAV Market will drive regional market trends. With regional governments enforcing strict laws pertaining to drug abuse, the market for Counter UAV Market in North America is set to witness exponential growth over years to come. Legalization of cannabis in countries such as Canada and U.S. through passing of acts in parliament is likely to enlarge scope of Counter UAV Market in North America over coming decade.

Which are the major players leveraging the Counter UAV Market growth?

[224+ Pages Report] According to Facts and Factors, the global eyeglass lens coating machine marketsize was valued at USD 13.5 billion in 2021 and is predicted to increase at a CAGR of 8.0% to USD 24.6 billion by 2028. The study examines the market in terms of revenue in each of the major regions,...

[215+ Pages Report] According to Facts and Factors, the Global Cable Blowing Machines Market Size was valued at USD 89.45 million in 2021 and is predicted to increase at a CAGR of 4.5% to USD 105.12 million by 2028. The study examines the market in terms of revenue in each of the major regions, wh...