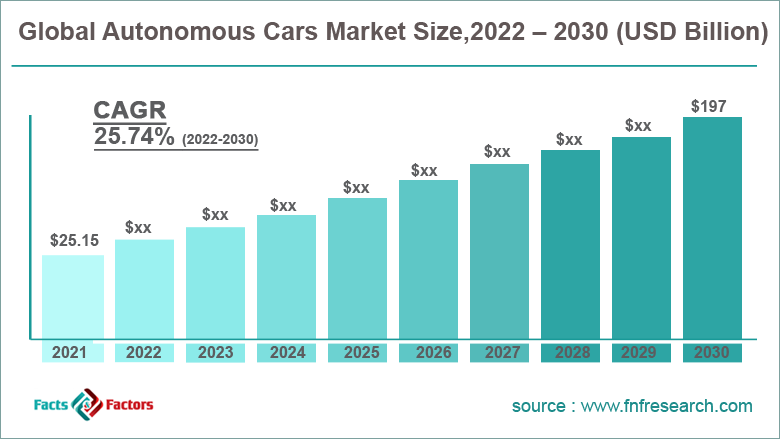 An autonomous car is a self-driving car that can effectively sense its environment and operate depending on the data collected without the need for human intervention. Autonomous cars do not require human passage to operate their mechanisms at any time. It works just like traditional cars and can visit places that conventional cars visit and can conduct all activities that a trained human driver can do.

The functioning of autonomous cars depends on actuators, sensors, machine learning systems, and complex algorithms. They are equipped with powerful processors to execute the data collected by the software. The cars work by creating and maintaining a map of objects, people, and the surroundings around them based on sensors located at various parts of the vehicle. 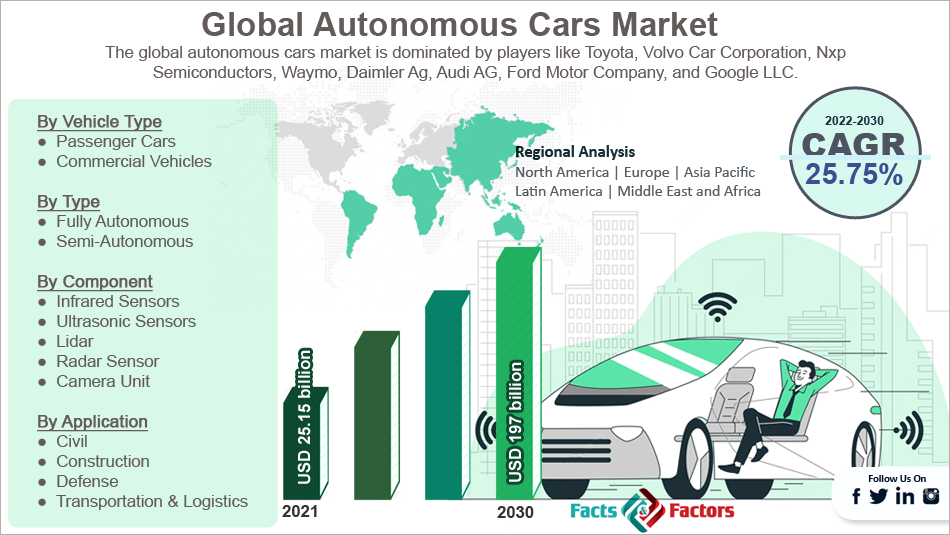 The global autonomous cars market is projected to register a high CAGR given the futuristic approach of the vehicle due to several commercial and environmental benefits associated with autonomous cars. Since it can function without the help of a human passenger, it works best for elderly citizens or differently-abled people who may find driving conventional cars problematic or they may need extra assistance. It is expected to help people gain more independence in terms of vehicular dependence.

Apart from the commercial benefits, one major reason why autonomous cars can expect a high demand is the growing inclination among the population toward environment-friendly transportation means. Autonomous cars can potentially assist in the reduction of carbon dioxide (CO2) emissions as a recent study has concluded that smart and concurrent adoption of autonomous vehicles can help in unleashing the true potential of cars. Factors like vehicle electrification, vehicle automation, and drive-sharing can lead to a reduction in traffic congestion, reduce transportation costs, improve livability and walkability, and free parking spots in urban areas. All of this can be achieved at a high rate by 2050.

The primary concern of players operating in the global market currently stands with improving the weather sensibility of autonomous cars. For instance, the efficiency of the cars may drastically reduce in case the car is driving through weather causing heavy precipitation or through a thick layer of snow. It is difficult for the sensors to detect road dividers since they may disappear under such circumstances. If the road markings are covered by debris, oil, water, or ice, the sensors and cameras may fail to function.

There is no doubt that autonomous cars are the key to a sustainable future along with other technological advances. This is the main reason why investors from the public and private domains have consistently increased funding for developing cars that can function with minimum human intervention. The world has already reached a place where self-driving cars have become a reality and as the investments continue to be directed toward viable growth, the global market can expect to benefit from this funding. The research activities are currently being carried out to develop better software systems, highly sensitive radars, and sensors, along with quicker information processing.

One of the key challenges faced by the global autonomous cars market players is the absence of supportive or reinforcing infrastructure required to develop fully automated cars. Factors like harmonized regulations, excellent roads, crash barriers, on-road telematics, a set standard for road renovation and construction, and signage are some of the prerequisites for making autonomous cars a reality. However, many countries lack these features as they struggle with political and economic problems.

The global autonomous cars market is segmented based on vehicle type, type, component, application, and others

Based on vehicle type, the global market is segmented into passenger cars and commercial vehicles.

Based on components, the global market is divided into infrared sensors, ultrasonic sensors, Lidar, radar sensors, and camera units.

The global autonomous cars market is projected to register the highest growth in North America with the US emerging as the dominant region. The country is known for its tremendous technological growth for many decades. The US has been at the forefront of developing modern-day systems including autonomous or self-driving cars, the prime example is the launch of Tesla with Full Self-Driving Capability where the autosteer feature of the car allows it to self-park, stay in lane, or change lanes automatically.

Although the critics are currently analyzing the efficiency of the feature, it is an improvement from all the previous versions. The regional growth may further be driven by the growing investments in the field. For instance, in May 2022, Hyundai Motor announced that it will be investing USD 5 billion in the US by 2025 that are to be directed toward the development of autonomous robotics and driving. The investment is expected to be a part of the larger plan by Hyundai to encourage mobility electrification.

The global autonomous cars market is segmented as follows:

1. Which key factors will influence autonomous cars market growth over 2022-2030?

The global autonomous cars market is projected to register a high CAGR given the futuristic approach of the vehicle due to several commercial and environmental benefits associated with autonomous cars.

3. Which region will contribute notably towards the autonomous cars market value?

The global autonomous cars market is projected to register the highest growth in North America with the US emerging as the dominant region. The country is known for its tremendous technological growth for many decades.

4. Which are the major players leveraging the autonomous cars market growth?